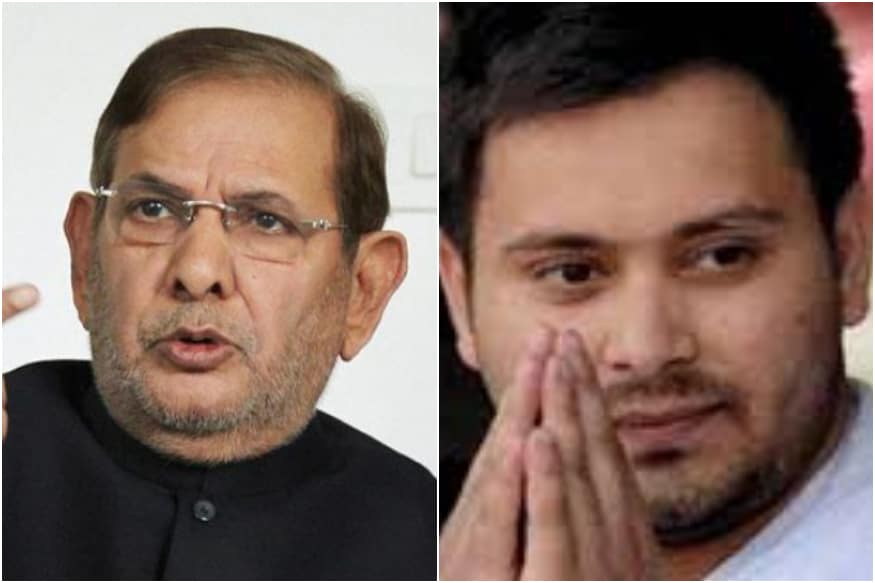 
Patna: Former JD(U) leader Sharad Yadav on Wednesday ruled himself out as a possible chief ministerial candidate for the opposition Grand Alliance in Bihar, asserting that Tejashwi Yadav, who has already been declared CM candidate by the RJD, fits the bill. Yadav’s assertion comes a week after leaders of Grand Alliance constituents like RLSP, HAM and VIP held a closed door meeting with him and later said cryptically that the former Union minister could be the five-party formation’s “chehra” (face) in the absence of RJD supremo Lalu Prasad, who is in Ranchi serving sentences in fodder scam cases.

“There is no possibility of my becoming the chief ministerial candidate. Tejashwi Yadav is doing fine and I think he would become acceptable to alliance partners as well. “I, for my part, have been involved in national politics all through my life. And I am not going to change course at this stage,” Sharad Yadav said. Assembly elections in Bihar are due later this year. The veteran socialist leader had floated Loktantrik Janata Dal after being booted out of Chief Minister Nitish Kumar’s JD(U) which he had headed for a number of years. He, however, contested the Lok Sabha elections last year on an RJD ticket and was supposed to merge his party after wresting back his pocket-borough of Madhepura.

Yadav lost to a less-fancied candidate of the JD (U) which fought in alliance with the BJP and Ram Vilas Paswans LJP and the three parties together swept the polls. The remarks by Yadav, who had only last week said he was “ready to play whatever role” was assigned to him, come close on the heels of his meeting with Lalu Prasad, the all-powerful RJD leader who calls the shots in the anti-NDA grouping notwithstanding his incarceration.

Sharad Yadav is believed to have met Prasad as an emissary of disgruntled Grand Alliance constituents which had been feeling uneasy over the RJD declaring Tejashwi as the chief ministerial candidate “unilaterally” without taking them into confidence. He also dismissed speculation about a ‘Third Front’ taking shape in Bihar comprising parties that are opposed to the NDA and “disillusioned” with the RJD-Congress combine, and asserted the need for “a unified opposition”. With Prasad apparently having put his foot down, the smaller allies seem to have fallen in line on the issue of CM candidate.

Madhaw Anand, national general secretary of RLSP, said their party chief “(Upendra) Kushwaha never said Sharad Yadav should be the Chief Ministerial candidate. By face he meant the role of a patron, which Lalu would have obviously played had he been available.” “And never did we say we are opposed to Tejashwi Yadav. Of course, his name needs to be endorsed by all Grand Alliance partners. That may take place in due course” he added.

HAM president and former chief minister Jitan Ram Manjhi, who had been threatening to upend the five-party formation, too appeared to have mellowed down. “I never said Tejashwi is not acceptable. I have only said his name has, so far, not been formally announced by the Grand Alliance and that is a fact. When the time comes, I may myself come forward and propose his name,” he said.

The loosely knit Grand Alliance also comprises Vikassheel Insaan Party, formed by former Bollywood set designer Mukesh Sahni, which is yet to taste any electoral success. The Congress, which has been the RJD’s oldest ally but is badly faction-ridden, is busy setting its own house in order and, therefore, skirting the issue of leadership of the opposition coalition, even as many of its leaders have been lending support to the anti-CAA drive of CPI rising star Kanhaiya Kumar.

Coronavirus In India | Images Of Migrant Workers Anand Vihar During...